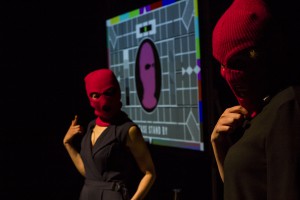 We’ve had a fantastic response so far to the first few showings of A Machine they’re Secretly Building and a real welcome at Lancaster Arts, Lincoln Performing Arts Centre and Derby Theatre. Thanks to all who came along and to those who stayed for a chat afterwards. It’s been great to discuss and dissect the ideas that are raised in the show and to hear your thoughts on what we’ve made.
You can catch this early tour of #AMTSB at the following venues – tickets available via the links – and we’ll be announcing further dates later in the year.
13th/14th April Oxford Playhouse, Oxford
27th April Warwick Arts Centre, Warwick University
30th May PULSE Festival, New Wolsey, Ipswich
18th June The Civic, Barnsley – Presented as part of Yorkshire Festival 2016
19th June The Hub, Leeds (pay-what-you-can)
20th June Lawrence Batley Theatre, Huddersfield (pay-what-you-can) Presented as part of Yorkshire Festival 2016